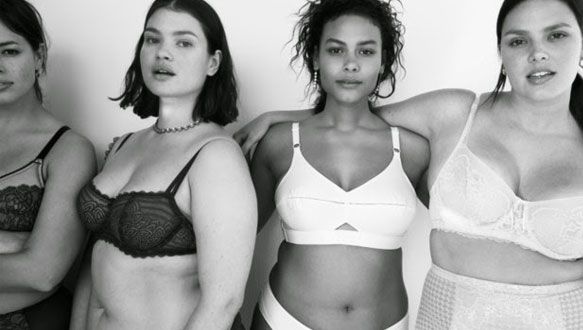 Why There’s No Such Thing As a Standard “B” Cup

You’ve probably heard the statistics: 80 percent of women are wearing the wrong bra size, and they don’t even know it. But many of these women have been wearing bras every day for decades. How, exactly, could they be so clueless? If you had the wrong size shoe, you would probably know it. So how could something so intimate be so off-base?

The Problem With Sizing

The problem with bra sizing lies less with the wearer than with the sizer. Bras have only been around since the 1930s, when corsets went out of fashion and people started making underwear as we know it today. The original idea of bra sizing focused on how much ptosis, or sagging, a woman’s breasts had. This proved to be minimally useful, so the “A,B,C,D” letters were eventually re-adapted to assess breast volume more than position.

The way that bra sizing works is as follows: The chest wall is measured in circumference just below the breasts. The breasts are then measured in circumference at their peak, and both numbers are recorded. If the difference between the two numbers is one inch, then the cup size is A, if it is two inches, the size is B, and so on. This approach is simple and direct, and seemingly adequate, but ultimately totally inefficient.

The Missing — And Most Important — Measurements

The problem with this approach to bra sizing is that it fails to take into account many things. For one, the most important measurement of any breast is the base diameter, or the width of the breast. As a plastic surgeon, this is the most critical assessment I make on any breast exam during a consultation. The base diameter of the breast sets the stage for any implant-based surgery by letting the surgeon know how much real estate she has to work with. Similarly, the width of the breast should guide what covers the breast. Much as a foot fits into a shoe, width can make or break its success; cup sizing as we know it takes no account of this.

Bra cup sizing also fails to recognize the height of the breast, and more importantly, how low it hangs. If you measure the circumference of the breasts at their peak, but the breasts are sagging to the floor, you are likely to underestimate how much breast really lives there. In some patients, most of the breast tissue lies low on the abdomen rather than on the chest up above. In extreme circumstances, this could mean that more than half of the patients’ breast tissue eludes the cup size measurement entirely, and remains unrepresented. This may be part of the reason why the original cup sizes came with a disclaimer that they were in fact not useful for very large-breasted women.

Now let’s consider gravity, the enemy of perkiness. Most breasts will sag over time, but some will sag more than others. The more a breast sags, the flatter it appears to be. The flatter it is, the less it can project forward away from the body. If you go back to the cup measurements, and you visualize the measuring process, it becomes clear that perky breasts will stick out more than flatter ones. And they could easily measure out to a larger cup size even if the breasts they represent are in fact half the size of the sagging ones.

It is now becoming clear that bra cup sizing is in fact quite arbitrary. So what about the professional lingerie houses that offer personal sizing? Are they the answer? Yes and no. As long as we have the current system, finding the right size bra will continue to be similar to finding the right size pair of jeans. The sizes will serve as a guideline, but it is only once you identify the perfect brand for you that things will really fit into place. It’s helpful to look for the model a brand uses—does she have similar characteristics to you, in terms of breast width and size?

The reason why lingerie houses may be more successful in fitting you than a regular underwear house is that they have a clear sense of how their items are sized, and they often have a variety of styles that incorporate different widths and projections to compensate for client variability. Still, this option remains a mere Band-Aid to the real problem: bra sizing was created by people who thought of breasts as small, medium, and large, once they were freed of their corset baskets 80 years ago.

As a dedicated cosmetic breast surgeon, I spend a lot of time thinking about breast shape, size, and proportion. I also spend a lot of time consulting with patients, most of whom are never really comfortable in their bras. It is my plan to devise a realistic bra sizing system in the near future, one that can be standardized and represents relevant measurements for each woman. Conceptually, this is not that challenging. The real question is, if this system were developed and proved to be useful, how would anyone get the world’s bra manufacturers to make the switch?

Seek Support Without the Wire

Old habits die hard for a multi-billion dollar industry, but there is hope that if enough women learn how to find the right bra, seeing the difference it could make may incite a revolution; cup size would finally become an antiquated custom. In the meantime, embrace your B, whatever that means, but lose the wire. The only thing worse than the wrong width bra is one with a metal band set to the wrong diameter. Technology offers us revolutionary new materials that can change and conform as needed, and support without the remnants of a corset. Support is possible without metal, and shape is easier with stretch. Until the day that bras are actually made to fit real breasts—and I believe that day is coming—the only chance we have at comfort is adaptability.

Are Vacation Breasts Worth The Hype?

CURIOUS ABOUT OUR EXPERTS? LEARN MORE:

Dr. Sophie Bartsich, MD, has a private practice in Manhattan and Long Island. She specializes in breast-related treatments.